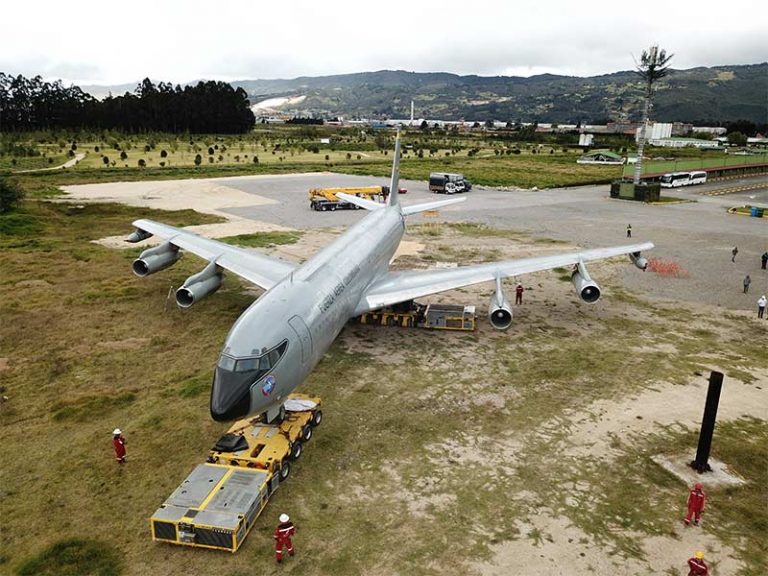 In 2018 a challenging service was obtained by the Colombian Air Force to mobilize one of the most important aircraft, the Boeing 707 (Also called “Zeus”). The aircraft went out of service and given its importance and history would be placed in a museum for commemoration. This service started from the air force facilities (El Dorado Airport, Bogota) and its final destination was the Colombian aerospace museum, which is located in Briceño, in front of Jaime Duque Park. In order to carry out this transport, the aircraft had to be emptied internally, leaving only the main structure, the wings were transported as independent units, each one in a high bed. Our objective was to reduce the level of dismantling of the aircraft. 17 people were involved in the logistics of transporting parts, accessories, wings, structure and track preparation.

The main structure was suspended from a Bailey bridge, as shown in the pictures. This transport was carried out 100% at night since the normal operation of the national roads could not be altered. The route was: Exit at the back of the airport (tertiary road on unpaved terrain), Calle 80, Cota, Chia, Autopista Norte via Briceño. Approximately 46 kilometers of travel that took two nights to complete the transport, the first from 11pm to 3pm, the second from 11pm to 1pm.

A year later, the plane was rebuilt with all its parts to simulate the real plane in the museum. Transportes Montejo was in charge of moving it internally in the museum to position it in its final place of exhibition (10 lines of self-propelled modular in perpendicular “T” configuration).

Main difficulties: cutting of trees and branches that invaded the circulation space of the aircraft on the tertiary road of uncovered terrain, 90° turn of the tertiary road intercepting and taking 80th street, circulation in Chia with network and electrical cables of low height, traffic lights that had to be removed and 90° turn between Pradilla avenue and the variant.

Project carried out in mid 2020, one month of continuous operation for which personnel (7 people)

A reactor was transported and installed for the ecopetrol plant in Barrancabermeja. Transportes Montejo moved the

Several mining shovels have been transported throughout this year 2020 and previous years. This machinery is

This dome was transported from Cartagena to Cali for the client Incauca. Main difficulties: Road “la

The transportation of 7 transformers from San Jerónimo Antioquia to Heliconias was executed. Main difficulties: The